How may I help your writing career?

I've got your back from idea to publication.

100s of tips on writing and editing.

Annie doesn’t know it, but that battle will lead her into another time and place where she will struggle to fulfill her prophesied destiny.

Beyond her fight with the supposedly extinct, super strong demon that’s suddenly running around a quiet residential neighborhood, she’s forced to mediate the tension between her new partner, Spencer, and her old partner/new lover, Cham.

Until the Wizard Guard team receives word of an honest-to-glory Viking warrior in the same neighborhood as the not-so-extinct demon, they think they have that particular situation handled.

However, tracking the Viking so they can force him to tell what he’s after throws all their lives into danger.

When the Viking warrior, Kolgaar, manages to drag Annie through a time portal, with a hapless Spencer hanging on for both their lives, every member of the team has to face overwhelming emotional fears before they manage to uncover the truth about the portal.  The emotional upheaval threatens the strength of the team.

Annie’s not thrilled to find herself elected savior of a village of Vikings and the neighboring coven of witches, who opened the portal.  After all, what does she know about battling demons?  No one in her time had even seen a live demon until her team ran into the one that came through the portal with Kolgaar.

Added to her lack of knowledge on the fine art of demon killing, is the sudden illness that strikes her while she and Spencer work with the coven to prepare for battle.  She may not live long enough to do battle, if she can’t discover the source of the weakness sapping her strength and her magic.

Ancient secrets bring more danger to everyone as the demons move toward a huge battle to slaughter every human.  What Annie still hasn’t been told may deter victory as she readies herself to lead the coven and the Vikings to war against the demon population.

It’s only when Cham and his new partner, Gibbs, finally move past mourning the loss of their teammates, that they uncover the secret that can save the world as they know it.

Taking a chance that they will arrive in the same country and time that Annie was sucked into, the two Wizard Guards set out to deliver the help Annie must have in order to live her destiny. 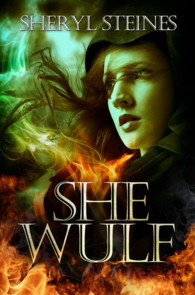 Forced into accepting new and unknown powers, Annie steps into unwieldy magical strength in the battle between humans and demons.  But the new power may be more than her body can hold and control.

The action is non-stop right up to the last chapter, where the story slows into reflection of what has happened, and leaves a question of what the future will be for Annie and Cham.

The editing in this second novel eliminated many of the formatting errors and typos that marred the first book of this series.  The author’s skills improve as she continues writing.  Her plot is well thought-out and consistent; her pacing is swift through most of the book.  All the emotional upheaval threatened to slow down the story more than once, but the author recovered her momentum and moved the characters back into action mode.

And I’ve got to say, the cover of She Wulf is kick-*#% great.  The concept, the use of color, the font size… everything about the cover shouts “professional” and “pick-me-up-and-read-me!”  I didn’t find a credit for the cover art, but Sheryl Steines surely found a winner when she selected her artist.

Go on out and pick up a copy of She Wulf and step back into the adventures of Annie and Cham in this second book of the Annie Loves Cham series.  You’ll get your demon fix for the week.

As part of this special promotional extravaganza sponsored by Novel Publicity, the price of the She Wulf eBook edition is just 99 cents this week–and so is the price of its companion, The Day of First Sun. What’s more, by purchasing either of these fantastic books at an incredibly low price, you can enter to win many awesome prizes. The prizes include a Kindle Fire, $550 in Amazon gift cards, and 5 autographed copies of the book.

All the info you need to win one of these amazing prizes is RIGHT HERE. Remember, winning is as easy as clicking a button or leaving a blog comment–easy to enter; easy to win!

To win the prizes:

About She Wulf: Annie is sent through an ancient time portal with only a prophecy to guide her; she struggles with a new destiny as she tries to figure out a way to destroy an un-killable demon and return home. Get it on Amazon.

About The Day of First Sun: A vampire, a rogue wizard and an army of soulless zombies are par for the course for Annie Pearce and Bobby “Cham” Chamsky of the Wizard’s Guard. But when the non-magical princess, Amelie of Amborix, is murdered by magical means, a deeper plot unfolds. Get it on Amazon.

About the author: Behind the wheel of her ’66 Mustang Convertible, Sheryl is a constant surprise, using her sense of humor and relatable style make her books something everyone can enjoy. Visit Sheryl on her website, Twitter, Facebook, or GoodReads.

3 thoughts on “Book Review: She Wulf by Sheryl Steines. Plus, $550 in Gift Cards, a Kindle Fire & Books Up for Grabs!”

Want to Save Money With a Professional Edit?

Click on the email address below and I’ll send you an infographic with 8 Smart Moves to make the most of your editing budget.